Comparing the piccolo vs. flute may seem unnecessary. After all, they’re both flutes, right? Well, yes, but there’s more to the instruments than that. 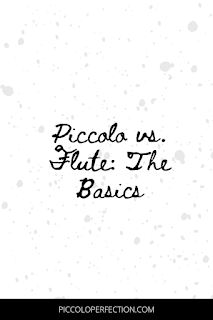 Be sure to consider the similarities and differences of the piccolo and flute. Then, you can know how to use them as a composer or performer.

What Is the Flute?

The flute is the main instrument of the western concert flute family. It’s also the only member of that family that doesn’t transpose in some way.
Concert flutes play in the treble clef, and their range starts at middle C or the B just below. You can play up to the C three octaves above that or even higher.
Flutes are common in orchestras and bands, and they’re an excellent instrument to play. The instrument has a lot of existing repertoire, and it continues to grow each year.

What Is the Piccolo?

The piccolo is a member of the western concert flute family, and it’s the smallest member. It’s also the highest-pitched member of the entire orchestra.
Piccolos range from the D or C in the staff to the C three octaves higher. Because of that, you may want to use earplugs while you play to protect your hearing.
However, you don’t have to use earplugs, especially in the lower range. The piccolo can also be a good instrument if you struggle to hold a lot of weight.

The way you hold the flute and piccolo are also very similar. You hold both instruments off to the right, and you place the embouchure hole against your bottom lip.
A lot of the keys correspond to one of your fingers on either hand. While the position for the piccolo and flute can be awkward, you can get used to it.
After a bit of practice, playing each instrument can feel more natural. Then, you can switch from piccolo to flute and back.

While not all of the specs are the same between the piccolo and flute, some are. For example, a lot of flutes and piccolos come with a split E mechanism.
That key makes it easier to play the written E above the staff. The note can be hard to play and keep stable, so the mechanism can be useful.
Other specs that come on both instruments can include a metal headjoint and and offset G key. Be sure to consider all of the specs you want to have on your piccolo or flute to help decide which is best for you.

While the flute and piccolo share the same written notes, they don’t sound the exact same. The flute’s sounding range is from C4 (middle C) to C7 or a bit higher.
However, the piccolo’s sounding range is from D5 (just over an octave above middle C) to C8. Knowing the sounding ranges can be great when it comes to composing or arranging.
But even if you focus on performing, you can use the ranges to choose the best instrument for a performance. Then, you don’t have to play too low or too high for the instrument.

Most flutes are some sort of metal, such as silver-plated, solid silver, gold, or even platinum. You may find a flute that combines two or more of these metals.
However, piccolos come in more materials, with wood being the most common. But you can also find plastic and metal piccolos.
Sure, you can find wood flutes, but piccolo materials are more diverse. That can be nice because it makes it easier to get the tone quality you want.

Because of all of the other differences, the piccolo and flute serve different roles in ensembles. For example, the flute might have the melody or a counter-melody.
However, the piccolo might play a descant part or some sort of upper harmony. The piccolo can also play with a lot of other instruments, such as the strings, brass, and even other woodwinds.
When you play the flute, you will probably play with someone else. Meanwhile, the piccolo player will have their own part, even if there’s no specific piccolo solo.

Piccolo vs. Flute: How They Compare

Whether you want to perform, teach, or compose, you should understand the piccolo vs. flute. Both instruments can work well together and separately.
However, you need to know when you should use each one. That way, you can write or perform the music in the best way possible.
Do you want some sheet music that would work on both instruments? Download your copy of Selected Famous Solos for Flute (or piccolo)!