When learning to play the piccolo, you should listen to multiple piccolo players. That way, you can know how the instrument sounds when played well. 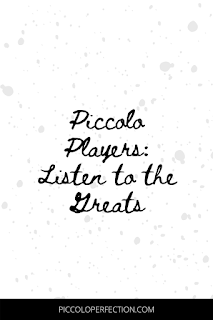 And you might realize the instrument isn’t as piercing as you might think. Here are some piccoloists to know and listen to, plus how you can become a better piccolo player.

He played in the Philadelphia Orchestra, first as the piccolo player. Later, he moved to the principal flute position. Barone made multiple recordings as both a soloist and with other musicians.

This player also created the book Learning the Piccolo. It’s an excellent etude book for piccoloists to have.

Barone’s son also had the name Clement. While the younger Clement wasn’t as famous as his father, he played the piccolo in the Houston and Detroit Symphony Orchestras.

John Krell was a flutist and piccoloist who played in the Orpheus Trio, Germania Symphony, and the Saginaw Civic Symphony. He grew up surrounded by music, and he later studied it in college.

Krell studied with William Kincaid and even played as a substitute musician in the Philadelphia Orchestra. Years after graduating, he officially joined the orchestra as the piccolo player.

A bit later, he gave the American premiere of the Vivaldi Concerto in A Minor. He was a recipient of many awards, including the National Flute Association (NFA)’s Lifetime Achievement Award.

Also in his career, he wrote a couple of books for the piccolo and piccolo players. He also taught at schools like Curtis and Temple University.

Nicola Mazzanti is probably the most famous Italian piccolo player today. Many composers have written works for Mazzanti, and the player has premiered a lot of pieces.

He’s also well-known for creating The Mazzanti Method, a piccolo exercise book. Mazzanti performs in orchestras and chamber groups around the world.

The player has also taught multiple piccolo courses to help other musicians. He went to the Conservatory of Florence; outside of school, he’s studied with James Galway and others.

You can hear Mazzanti play on multiple recordings. He plays with piano, orchestras, and other instrumentations.

French piccoloist Jean-Louis Beaumadier studied at the Marseilles Conservatory with Joseph Rampal, not to be confused with son Jean-Pierre Rampal. Beaumadier later studied with Jean-Pierre in Paris.

He played piccolo in the Orchester National de France for 12 years. Since then, he has recorded multiple pieces for the piccolo across 30 CDs.

Beaumadier has performed at festivals all over the world. Those performances have been at festivals and conventions and with various orchestras.

He also gives masterclasses all over the world, so piccolo students can learn from one of the greats.

I have to share my masters flute/piccolo teacher, Dr. Christine Erlander Beard. She has performed and taught all over the world on both the flute and piccolo.

Beard studied with Karl F. Kraber for her masters and doctoral degrees at University of Texas at Austin. She’s taught at the University of Nebraska at Omaha since 2002, and she has also subbed with the Omaha Symphony.

In 2019, she joined the Whole Musician team, which conducts retreats for musicians. The programs focus on more than just playing.

She’s also an artist for Sankyo flutes and Hernandez flutes. If you get the chance to study with her, go for it.

Nicole Esposito is a flute and piccolo player and the current flute professor at the University of Iowa. She has performed all over the world, and she’s also taught in different places.

Her annual Iowa Flute Intensive attracts many flute and piccolo players. She plays on a Hammig piccolo and endorses the LeFreque sound bridge, which can help you get a smooth sound.

Esposito has won multiple competitions, and she has had her articles published in multiple flute and music publications.

While she doesn’t focus exclusively on piccolo, she does play it very well. If you’re looking for a good teacher in Iowa, she’s great.

Erica Peel is the current piccolo player of the Philadelphia Orchestra, following the greats like Barone and Krell. She’s also the professor of the piccolo program at the Peabody Institute at Johns Hopkins University.

Peel has won many music competitions, and she’s been a competition judge. She also formed a pop-fusion duo, so she plays more than classical music.

While that group is no longer active, Peel continues to play amazing music. She also created the book Practice with the Experts – Piccolo.

The book contains exercises from many professional piccolo players and teachers. It’s a free resource, so give it a try if you want to learn to play the piccolo.

Gunn has performed in many different settings outside of the orchestra, including at various festivals. Her career has also taken her to different states and countries.

She’s also taught masterclasses around the country. Before joining the Chicago Symphony, she played with the Wheeling Symphony, Louisville Orchestra, and Fort Wayne Philharmonic.

During her time in Chicago, she has worked at-risk youth in the area. She’s also coached musicians in training orchestras, like the New World Symphony.

He’s performed on the piccolo regularly for many years, and he started doing so regularly with piano in 2006. Verhoyen has recorded multiple CDs as a piccolo soloist.

Thanks to his dedication to Flemish music, the Union of Belgion composers awarded him the Fuga Trofee. He’s an excellent piccolo player to listen to.

This list includes a few of the most famous piccolo players. However, many other flutists play the piccolo as well, even if they aren’t well-known.

Many teachers and performers learn to play the piccolo. Even if you don’t intend to become a piccolo specialist, being able to play it is important.

You may be able to get a gig on the flute by playing piccolo if there’s a small piccolo part. Pros need to make themselves marketable, and the piccolo is a great way to do that.

Flute students of all ages and levels might also play the piccolo. While I wouldn’t recommend the piccolo to absolute beginners, you can start to play it once you develop your flute playing.

Then, you can play both instruments alone or in ensembles. If you want to join a community group or make it into the higher band at school, the piccolo is great.

You won’t have to compete with as many people because the piccolo can set you apart. While you still need to be good at the flute, you don’t have to be perfect.

How to Become a Piccolo Player

Flute players wanting to become piccolo players will give themselves an advantage. But if you want to make the most of that skill, you need to know how to become a good piccoloist.

Before you pick up the piccolo, you should consider the following steps. That way, you’ll set yourself up for success.

With few exceptions, the flute is a prerequisite to playing the piccolo. If you don’t play the flute yet, I suggest learning at least the basics.

You don’t have to reach a professional playing level. But you should know how to read music, how to play most or all of the notes in the flute range, and how to control your embouchure.

If you have trouble playing higher notes, take extra care to work on those. That will make it easier to start playing the piccolo.

Once you start playing the piccolo, create a consistent practice schedule. You don’t need hours a day to practice, and you can start slowly at first.

When you start the piccolo, you need to get a good instrument. It’s more important than getting a ton of piccolo music to play or even getting regular private lessons.

If you can’t get a sound on your piccolo, you won’t be able to improve. Well-made piccolos will make it easier for you to play as a beginner.

While the cheap piccolos on Amazon seem like great deals, they usually aren’t. They might use cheap materials, and repair technicians won’t even touch them.

The only time I’d recommend a cheap piccolo is if it’s your only option. Even then, use the time while you play it to save up for an upgrade.

Ideally, you’ll have the money and time to take private lessons on the piccolo. You can rotate between the flute and piccolo if you already have a flute teacher.

But if not, you can find someone willing to work with you on the piccolo. You don’t even need to have lessons forever; a few can be enough to help you get started.

Piccolo books and courses are also useful for teaching yourself. That way, you don’t need to worry about finding the right piccolo teacher for you.

At this point, you want to keep practicing and improving. You may encounter some problems and setbacks, but try not to let that get to you.

Remember what it was like to learn the flute. It probably took you a while before you got a consistent sound and could play certain songs.

So give yourself the same grace when you first start to play the piccolo. Then, you’ll be able to enjoy it for years to come.

As you keep getting better, you’ll need to find piccolo music to keep you interested. While there aren’t as many pieces for the piccolo as some instruments, the repertoire is growing.

Try to find pieces that you like to listen to. Then, you’ll be more likely to want to practice them yourself, and you can have fun when you play.

You’ll look forward to practicing, and you can keep from getting bored. When you’re ready for a new piece, you can use blogs like this one to find ideas, or you can go on YouTube to find pieces.

Piccolo players all around the world play everything from symphonies to unaccompanied works, classical to fusion. If you want to become a piccolo player, you should listen to some of the greatest players.

Then, you can learn from their recordings and improve as a piccoloist yourself. Who knows, you may become one of the best piccolo players of your time.