Do you know your piccolo history? If you want to play the piccolo and take it seriously, you should understand where the instrument came from. 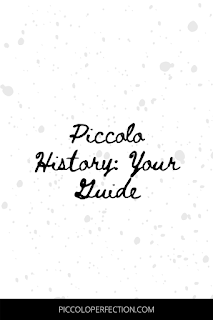 A lot of its history is similar to that of the flute. But there are some important differences that you should know when playing both instruments.

Piccolo history goes back almost as far as flute history, starting with ancient flutes and piccolos. People have found many transverse flutes and similar instruments dating back thousands of years. Flutes and piccolos were found in Egypt, China, and other countries.

One early piccolo is from 200 BCE, and it was found near an Etruscan tomb, now part of central Italy. The flute they found is less than two feet long, signalling something smaller than the modern concert flute.

There have also been discoveries of bone flutes from over 40,000 years ago. However, there has also been some debate as to the legitimacy of the flute. Some people aren’t sure if animals chewed on the bone and it only looks like a flute.

Intro of the Fife

The fife got its start in the Middle Ages between 500 and 1430. While the fife still exists today, it was the first instrument that resembled the modern piccolo. Early fifes had six key holes and a single joint, and people played them in militaries.

In the 16th century, the Swiss started using the fife in European military music. Fife players would sound commands and use various calls to tell the military what to do next. The sound of the fife can cut through other instruments, and so can the piccolo today.

People later used the fife and drums when performing for King Henry VIII. Eventually, Charles I banned fifes from fairs except when players obtained a license from the Royal Trumpeter.

Unfortunately, there isn’t a ton of information on piccolos in the Baroque era. We don’t have many images to represent the changes to the instrument. As I mentioned when writing about piccolo repertoire, there are piccolo concertos from Vivaldi.

However, those pieces may not have been written specifically for the piccolo. So while it’s a great way to enjoy Baroque music on the small flute, it may not be entirely authentic.

In the 19th century, the piccolo started to see some more development, like the piccolo. But changes made on the flute took a while to reach the piccolo. According to Zart Dombourian-Eby, flute makers created piccolos using more than 40 systems for fingerings.

They also used six materials and seven tonalities when creating piccolos. Some piccolos from this era even included a footjoint with the few keys that piccolos don’t have today. Researchers claim these were small flutes rather than piccolos because they also had cylindrical bores.

Most flutists and woodwind players know Theobald Boehm for his influential flute design. He made key holes the same size, and he thought that keys should stay open when you aren’t using them.

Flutes at this point had conical bores, but Boehm switched to a cylindrical bore. He tried to make these changes to the piccolo as well but had trouble. Another maker, Thomas Mollenhauer, did some experimentation and made Boehm system piccolos.

But they weren’t very common until well after the Boehm flute gained popularity. Players continued to perform on six-key conical piccolos. Now, most piccolos have a conical bore, with the exception of metal models and the wooden Nagahara Mini.

Makers in the 20th century experimented with some other piccolo designs. Nicholas Alberti created a transposable piccolo that you could play in both C and Db. It has oblong keys that work well with both transpositions, so you can push the headjoint in to play in Db and out to play in C.

Alexander Murray developed a piccolo with an open G# and open D#, which is the opposite of the Boehm system. Murray also added a lever to facilitate F#, which is similar to the Brossa F# that some modern piccolos have.

In 1992, John Fonville came up with the idea for a piccolo that could play quarter tones. It would have open holes and two extra keys, making it easy to play notes outside of the 12-note scale.

Makers like Haynes used to produce piccolos in Ab, which would allow players to play low C, albeit a major third higher on the instrument. That way, performers could play piccolo music with the low C in the piece.

Another important part of piccolo history was when the instrument became a common part of the orchestra. Some scholars believe Handel first used the piccolo in his opera Rinaldo. Others believe the piece called for recorder, but the key of G major points to the piccolo.

Tchaikovsky and Berlioz gave the piccolo more soloistic passages. More composers started to use the piccolo in different ways. Shostakovich wrote a lot of parts for the piccolo, from his symphonies to piano concertos.

The piccolo also has become an essential member of concert and wind bands. Composers like John Phillip Sousa have written fantastic piccolo solos, like Stars and Stripes Forever.

Early concert band music also used a lot of flat keys, which was hard for piccolos at the time. To make those keys easier to play, the Db piccolo gained popularity.

Music from that era has now been transposed so that you can play it on a C piccolo. That way, piccolo players don’t have to have multiple instruments on hand.

Now, the piccolo is becoming more popular than ever. Composers are writing fantastic repertoire for the instrument, and players are starting to appreciate the piccolo even more. Of course, there will always be people who hate the piccolo.

However, it’s cool to see more people falling in love with it. Being able to play the piccolo can provide you with more playing opportunities than the flute alone. For example, orchestras only have two to three flute and piccolo parts.

Even if you want to play the flute for fun, learning the piccolo is worth it. You can explore new repertoire, and you can have fun while you do it.

If you want to learn more, check out The Complete Piccolo by Jan Gippo, which is where I found all of the information here.

The flute and piccolo have had a long history, and it’s important to understand the piccolo history as a player. That way, you can approach music with the right mindset. You can learn historical performance practice, for example.

Whether you want to become a professional or not, you should give the piccolo a chance. It might surprise you.